The city of Bordeaux is constructing a new landmark centre dedicated to the culture around the famous Bordeaux wines.

The centre is planned to open in 2014. The unusual shape of the building as well as its double skin structure is beyond anything covered by any codes for wind loading. Therefore, FORCE Technology was contracted to perform a wind tunnel study to determine the net wind pressures on both the outer and the inner skin of the double skin structure and on the large glass panels.

How to measure the wind pressure

Modern 3D printing makes the construction of a model of such a structure relatively straightforward, using the architect’s 3D drawing as a basis. In the tower which extends from the fourth floor of the building up to the crown at 55m above ground level, the distance between the inner and outer skin varies considerably, but it is large enough to be modelled in the selected scale 1:200. Hence, in that part of the building, the model was instrumented to measure the external pressure and the pressure in the void between the two skins. In the open crown of the tower, the pressure was measured on the outside and the inside of the wall in order to determine the net pressure.
The depth of the void between the two skins of the torus roof was too small to be accurately modelled in the selected scale, so only the outer surface was modelled. The pressures on this surface were measured, and the pressure in the double skin  void was conservatively estimated on the basis of the measured external pressures and the planned division of the double skin into separate compartments.

Presenting the results of a pressure study in a way that is readily understandable for the design engineer may be a challenge. In this case, FORCE Technology combined the skills of the group performing the physical experiments with the skills of the in-house numerical computation group. The test results were exported to the CFD post-processing tool StarCCM+ which on one hand was used to visualize the test results and on the other hand interpolated the results from the about 600 measurements to a very fi ne grid (approximately 50,000 points). Using the TECPLOT or similar software, the design engineer could then directly read the characteristic design pressure at any point on the building. 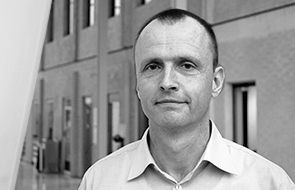