The steam lines at Ringhals nuclear power plant are subject to periodic inspection. So far, the thickness has been measured manually by using ultrasound, but now tests have been made with the mechanized T-scan system.

"By replacing the manual measurements with an automated system the possibilities to measure the thickness decrease over time will increase, due to increased repeatability and possibility of post treatment of data", says Torbjörn Nilsson at Ringhals. "It is particularly interesting for large items that require a lot of measuring."

T-scan automatically measures the thickness to nearly one hundred percent in a certain area. The result is shown as a thickness map. FORCE Technology has used the method for decades, but not until recently, it was introduced to the nuclear industry.

Systems that age must be investigated

In non-destructive testing, the focus has been inspection of welds and not thickness measurement. However, with a system that is now close to 40 years of age, there is a growing interest in mechanical thickness measurement, as erosion and corrosion damage start to show.


"The most important thing is to get repeatability", recounts Per Wallin from FORCE Technology. "With reliable measurements the correct maintenance program can be applied and thereby reduce costs", Per says.

"There is no significant cost saving for the measurement itself", says Torbjörn Nilsson, "the advantage is that a mechanized system does not get tired; but it requires good availability and objects located close to each other."

"It's time to take thickness measurements seriously, there's money to be saved with correct data", Per says.

"Now, we have performed a first measurement with T-scan. It will be really interesting after the second measurement whether we can see any differences in thickness", concludes Mr. Nilsson. 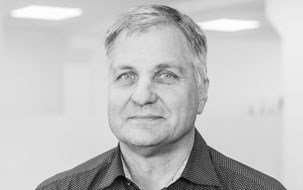