The requirement for EMC risk handling is more explicit in harmonised standards for medical devices than anywhere else.

In the European New Legislative Framework, it has been announced that all electronics and electronic equipment must be marketed in accordance with suitable considerations and remediation of risk. Above all, this applies to the risks that arise because of potential electromagnetic incompatibility, i.e. the risk that an electrical appliance does not have the ability to function as intended in an electrical and magnetic environment caused by other appliances.

The requirement for EMC risk handling is more explicit in harmonised standards for medical electrical equipment than anywhere else.

In the fourth edition of EN 60601-1-2 (2015), which is the EMC standard for medical electrical equipment, risk management is a major part of the standard, and there is a fundamental difference from the traditional way that equipment is EMC approved. Traditionally, product specific standards are made where the test levels are applied to all of the products that are covered by the standard. In contrast, medical equipment must always be considered individually, and it must be documented using risk analysis, that EMC test levels are chosen correctly for the particular device, for its intended use, for the people who will use the equipment and for the environment in which the equipment is used. And predictable misuse must also be taken into account.

Regardless of which risk analysis method you choose to employ in order to comply with EN 60601-1-2, the methods must cover the possible consequences of existing in the electromagnetic environment, which the medico device or system is expected to operate in during its total life cycle. The manufacturer must therefore remember that many electronic components degrade over time, and that the appliance’s immunity or emissions will almost always change over time. It is simply a question of by how much. The good Risk Management File should provide reasons for why the stated test levels are sufficient – now and during the course of the intended lifetime of the appliance.

The current version of the standard – version 4 of EN 60601-1-2, instead operates with the separation of the kinds of environment that the equipment is used in, and the mindset is to look at the probability that electromagnetic incompatibility will occur and let speculation about consequence be something that relates to the individual product, rather than dividing products into two fixed consequence groups.

Three kinds of use environments are considered:

For each of these use environments, the standard provides a starting point for test levels, but it is emphasised that the final test level must be set by the manufacturer in the risk analysis for each EMC test that is to be executed.

It must be analysed whether the use environment means that several EMC standards have to be looked at. This could be standards for unusually noisy environments, for use in close proximity to radios, for use near magnetic body scanners, for airplanes or perhaps military EMC standards.

How to do it

ISO 14971 is typically used as the standard for the manufacturer’s Risk Management, since EN 60601-1-2 refers precisely to ISO 14971, including the same understanding of definitions. ISO 14971 collects all of the risk considerations – including risk that arises as a consequence of electromagnetic interference. 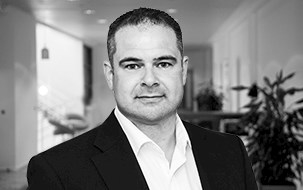 The article is a translation of a short version of an article published in
Aktuel Elektronik no. 2, 2017