.TIBA – a wearable for changing eating habits. A case about designing for meaningfulness in smart health care products.

.TIBA is a wearable and app designed for people who want to change their eating habits  – including new diabetics. As these people must learn new habits, and recognise bad habits in their lives, .TIBA helps them identify the cues which lead to bad habits and mentally consider how they can create new habits from old.


The .TIBA project – a wearable helping you lead a healthier life

As part of IdemoLab’s work with Welfare Tech’s Innovation Network for Health and Welfare Technologies (Innovationsnetværket for Sundhed og Velfærdsteknologi), this project aims to explore and generate new knowledge about what it means to design for meaningfulness in smart health care products.

The project originated in an early phase of the .TIBA start-up. They were interested in a device which was simple to use, and acts a catalyst for self-reflection and eventually, habit recognition and change. They joined IdemoLab’s workshop series on designing for meaningfulness and during several meetings we discussed how this device might enable people who are newly diagnosed with diabetes to setup their new lives, learning new habits.Thus, enabling them to lead a meaningful life where they are aware of their actions, reactions and how to navigate the world with their new challenges.

User scenario with the wearable

A newly diagnosed diabetic comes home after a long day of work; tired and frustrated by their new diet and lifestyle. They sit on the couch, watching TV for some time, after awhile they start to feel hungry. Yet, before acting upon the sensation they stop, press a button on the wearable,  and turn a dial to a specific stop point, registering that they are experiencing a common trigger: feeling hungry when tired, registering how intense that feeling is. The subject then receive an encouraging text message helping them to keep on track. Then, they proceed to go to bed, resolved to establish new, healthy habits.


Physical build of the .TIBA prototype

Originally, the device was a simple Bluetooth button (Flic.io) and a band for wearing around the wrist. Users could tap on the band and then report via a text message how high the intensity of the feeling was.

IdemoLab conducted a workshop to evaluate and experiment with possible technologies the company could potentially pursue in terms of how input might happen such as via a soft button, a rotary wheel, or a capacitive touch interface. Habit is currently being developed by the company.


Physical characteristics of the .TIBA wearable

It was important to the company founders that we did not have a display on the wearable, that it only act as an input device; being particularly interested in how to facilitate reflection, not wanting to distract people with unnecessary information or operations. It is a non-screen device, and one which is felt.

IdemoLab were particularly intrigued by the rotary wheel concept where the person could turn it to feel and hear the clicks of each level. Setting it, we imagine, would eventually become an experience where one did not have to look at the device but could simply feel where to move it to.

The aspect of critical reflection was quite important here, wherein the wearer must ask themselves, “am I really hungry, or just tired, and how tired?” By asking questions such as this, the wearer would come to know themselves and their habits better.

This is a key attribute of designing for meaningfulness, coming to understand the self well enough to identify how and when a change is needed. That change leads to meaningfulness, and a meaningful life the individuals decided upon, rather than being thrust into. 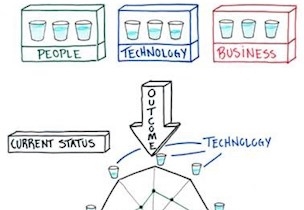 Take the “Next Step” with IdemoLab and mature your idea towards a market-ready smart IoT product.

IdemoLab bridges the gap between technology and design. We focus on the important early stages of the design process and strive to create meaningful experiences for users and customers. IdemoLab / FORCE Technology

Designers create a device that allows someone other than the pregnant mother to follow an unborn baby's movements.

Better user interfaces and interaction on electric bikes for people with disabilities.

ERNIT - A digital piggy bank for the cashless future

Technological assistance to Haystack in the development of a digital piggy bank concept.