With model tests, the propeller’s light running margin (LRM) can be objectively evaluated, and the propeller pitch can be modified if needed.


Most large commercial vessels are propelled by a fixed pitch propeller with a direct drive to the main engine. This configuration has been used for decades and is simple, reliable, and efficient. However, the propeller needs to be carefully designed so that the propeller curve is below the engine curve (see Figure 1), and if so, there will theoretically be sufficient power to propel the vessel in still water trial conditions with some margin for added resistance. Added resistance can be either from fouling of hull and propeller or from the environment in the form of waves and wind.

The light running margin (LRM) describes how much the propeller curve is below the engine curve, and the specific LRM percentage is deducted from the figure above as the relative length of the horizontal end of the engine curve. In this example 6 % LRM.

In the event of added resistance from either fouling and/or waves or wind, the propeller curve will move upwards, and the power reserve will be reduced. This is not a problem as long as the propeller curve is still below the engine curve, and full power is still available. However, at some point the added resistance will result in the two curves crossing each other (see the blue curve in Figure 1). Here the engine curve, i.e. the available engine torque, becomes the limiting factor. In the example above, only 88 % of the power is available since the engine is not able to drive the heavier-running propeller due to its limited torque. Still, 88 % should be sufficient to safely operate the vessel. If, however, the added resistance increases, the available power will be reduced, and at some point, the power will be insufficient for safe operation.

How do one choose the correct LRM? There is really no correct answer to this question. However, lately the engine manufacturers have increased the guidance so that up to 10 % LRM is recommended in some cases.

From the shipyard’s perspective, the LRM should be as low as possible in order for the propeller to be as efficient as possible at the sea trials. Low LRM means a propeller with a higher pith and therefore a more efficient propeller. Especially in a seaway, a propeller with too low LRM will be ‘punished’ and the speed loss will be significant.

In order to predict the precise speed loss in a given seaway, self-propulsion model tests with a free-sailing model in waves are needed. Furthermore, the propeller needs to be carefully controlled so the propeller torque does not exceed the propeller curve at any point.

With model tests, the propeller’s LRM can be objectively evaluated, and the propeller pitch can be modified if needed. Without free-sailing model tests in waves, there is no physical knowledge about the attainable speed in a given seaway, only assumptions.

The control algorithm needs to account for certain scaling effects and react to the vessel’s speed in order to cut down power when the vessel’s resistance is increased, e.g. when a few large waves pass the model.

We have recently developed such a control algorithm, and the first model tests have been successfully completed. The results of the first tests showed a slight increase in the LRM compared to the initial propeller layout. We will continue to develop and refine this algorithm to the benefit of our customers.

Facilities letting our customers their test ships and offshore structures under extreme conditions.

Profitability of retrofitting your vessel 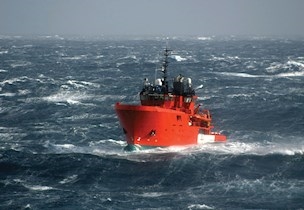 Performance of model tests at the early design stage to evaluate manoeuvring characteristics. A model-scale still water tank test is made to predict propulsive performance of a full-scale vessel.