Over time, various methods have been used to protect ship hulls from fouling. Surface profilometry and SEM/EDX are valuable methods for analysis of functional surfaces.

Protection of ship hulls from fouling and attachment of marine life has been done by various methods over the ages. From copper plating on wooden hulls over tin based self polishing antifoulings to modern day copper and zinc-based antifouling using, for example silyl acrylate binders as well as the use of low surface energy silicone coatings.

Research into antifoulings is ongoing, with regard to increasing fouling resistance performance, reducing fuel consumption, and lowering the environmental impact of the coatings. While the performance of modern-day antifouling coatings is very good, there is ample room for improvements on all points, especially with longer drydocking intervals requested by the shipping industry and the emerging technologies such as floating windfarms and wave energy generators.

The current study is a part of an ongoing investigation of the mechanism of action of copper containing antifoulings, with the overall aim of controlling leaching and increasing the performance without increasing the content of biocide.

The surface and cross sections of samples from commercial vessels in service and from test sites have been investigated with SEM/EDS and 3D surface profilometry. The samples and scientific knowhow have been provided by Hempel A/S, supplier of antifouling technology and inventor of several technologies in the field.

The biocide is together with the matrix of the coating system the main factors in determining how effective the fouling prevention is. The biocide used here is the organometallic compound copper pyrithione. The surface of samples obtained by divers from a trading ship has furthermore been investigated. Two identical samples from the same ship - one clean and one fouled - have been investigated by 3D surface profilometry. The two samples are identical, from the same batch and possibly applied under the same conditions. The samples are carefully cleaned from fouling residue without damaging the surface.

Figure above: 3D/surface profilometry of two identical antifoulings taken from a trading ship after removal from the hull and cleaning. Left is fouled sample and right is clean. The Surface profile is taken with Sensofar Blu-Neox 3D optical profilometer.

The cause of the increased roughness is most likely something that has taken place during application such as dry spray or dust settlement on the wet surface.

The method gives an excellent insight in the actual topography of these samples, and a larger study of samples exposed to a variety of conditions could be highly valuable.

The surface profile of real-life exposed samples is valuable information for Hempel’s R&D team to further refine the formulation of antifoulings.

A secondary line of investigation using SEM/EDX was carried out, in an effort to elucidate the leaching pathway of copper pyrithione. A sample that had been exposed to seawater for 30 months was carefully cross sectioned using a guillotine knife taking care to avoid smearing as much as possible. Results are seen below along with analysis for relevant elements.

It is clearly seen that the copper and sulfur levels follow each other, and the surface (right) is leached from biocide until area 6. It is clear that biocide leaches through the matrix without creating channels – at least on a scale visible in SEM. Furthermore, in the leached area both the sulfur content and the copper content are close to zero and thus it is considered a useful method to evaluate the leach rate of the copper pyrithione.

Methods are not limited to coatings

Both surface profilometry and SEM/EDX are valuable methods for analysis of functional surfaces and are not only limited to coatings but could also be used for e.g., medical devices such as catheters and wound dressings. 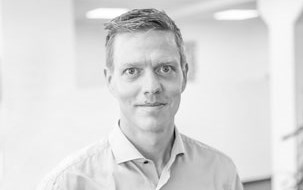